Why colouring is good for you

Research shows that tapping into your creative potential, even in simple ways, makes more of your brain capacity available, drops your stress hormones and as a result, upgrades you at a cellular level.

Today we have a guest post from Dr Suzanne Moss, an artist, teacher and lecturer, mentor and coach who speaks regularly about the benefits of colouring.

The following is an excerpt from one of her talks. 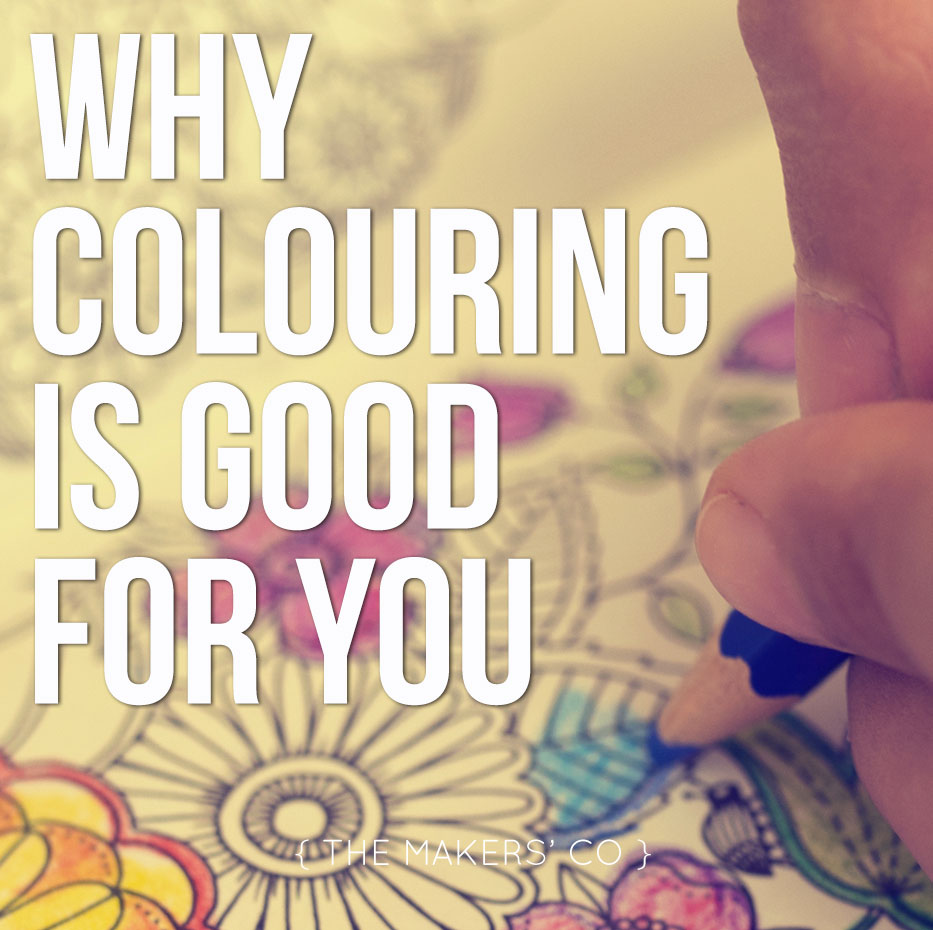 Whether you love colouring or feel cynical about it, research has demonstrated substantial drops in cortisol, the stress hormone, in 75% of participants after only 45 minutes of colouring! I guess the 16 million people (and counting) who bought The Secret Garden adult colouring book are onto something!

While stress is not good for health or well-being, it’s not at all conducive to thinking intelligently or creatively either. Consequently, it makes sense to find ways to become calm. French-Belgian analyst and philosopher – Julia Kristeva – in ‘New Maladies of the Soul’ (1995) suggests ‘ to cultivate an inner-life, a secret garden’ and express oneself from that.

Isn’t it fascinating that the most popular colouring book of all time is titled “The Secret Garden”?!

Whether intentionally contemplative or not, colouring can evoke a state of calm and contemplation, similar to how folk go to their sheds or studios.

Professor Nancy Andreasen, in her creative brain research, found relatively quiet times in the brain know as R.E.S.T. (random episodic silent thought) while doing relaxing activities, when new connections occurred that gave rise to original ideas. Andreasen notes ‘the problem’ is articulated and released for a time, while something else gets done that was not attached to finding an answer.

Major leaps in all 20th Century art forms came about due to the teachings of visiting Zen master and teacher DT Suzuki at Columbia University in the forties and fifties. Essentially, these were about not being attached to outcome; not being concerned with what others think, meditating and doing the work. For many artists their art practice is their meditation. (Check out the marvellous book ‘The Smile of the Buddha‘ if you haven’t already.) 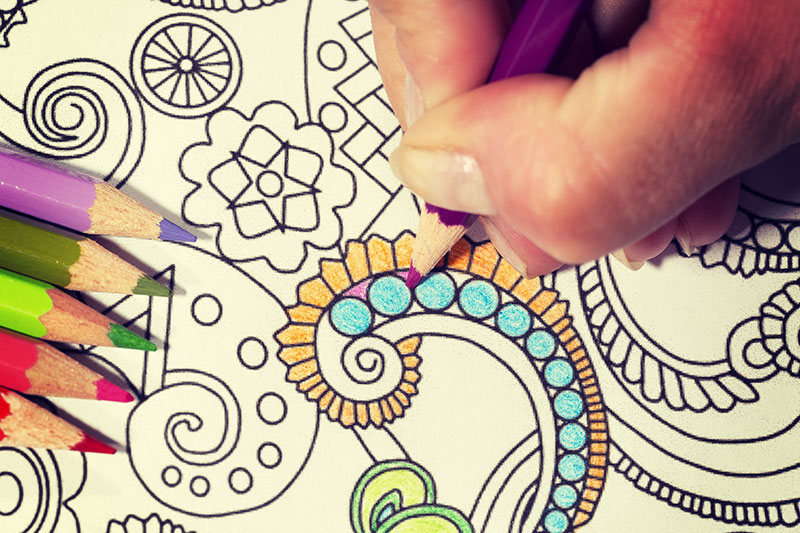 From the feedback I’ve received, colouring is a way to get into a calm ‘headspace’, without worrying about how it will turn out. And since most of us coloured at school, we don’t need permission to be an ‘artist’ to do it.

No time for ‘child’s play’? Unfortunately inherited ideas such as ‘being creative is childish and/or a luxury’  keep many on the treadmill and a percentage of those on track to the Coronary Care Unit. Did you know that, on average, cardiac disease kills one Australian every 12 minutes?

How did things get to be so crazy?

Ken Robinson in his book “The Element” asks similar questions. He tells how attitudes about the unimportance of the arts have been fostered by government educational policies driven by human resources requirements of the Industrial Revolution. Robinson notes the profound influence on the formation of a hierarchy of subjects where the humanities and arts – traditional homes for cultivating creative thought and action through writing, music, visual arts and drama – came to be considered far less important than maths and science. 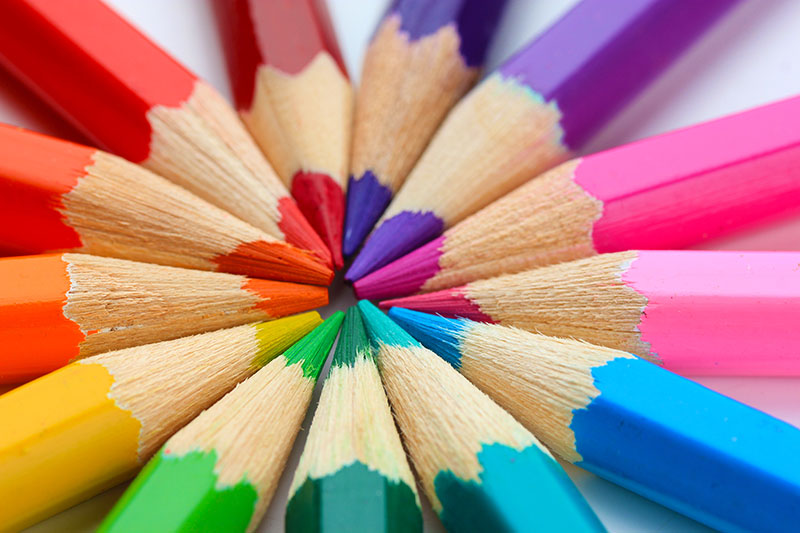 It is no wonder many people I’ve spoken to during my teaching years deny their ability to be creative; thinking it’s the territory of ‘creatives’ or artists. Not true.

“Creativity is our birthright. It is an integral part of being human, as basic as walking, talking, and thinking…Every human life contains its seed and is constantly manifesting it, whether we’re building a sand castle, preparing Sunday dinner, painting a canvas, walking through the woods, or programming a computer. The creative process, like a spiritual journey, is intuitive, non-linear and experiential. It points us toward our essential nature, which is a reflection of the boundless creativity of the universe.”
John Daido Loori,The Zen of Creativity

What if we followed Loori’s clues? Experience the creative process…become aware of our essential nature… reconnect with nature….know, as Jackson Pollack said ‘I am nature!’ and in need of solutions for a myriad of complex problems. Calm, creative and connected we are more likely to be successful.

Brainstorming, the most commonly known method of creative thinking, has been shown to be ineffective. Really. Speed, pressure and noise prevent the creative slower functioning parts of the brain, and are not suitable conditions for introverted people who, historically, have provided an estimated 90% of the world’s best ideas. (See TED talk by Susan Cain) 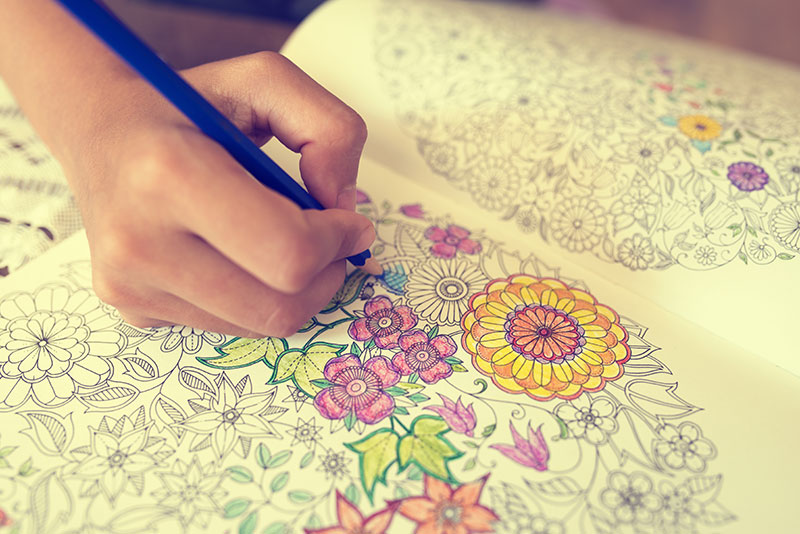 I first read this resonant quote from Wendell Berry several years ago:

To deal with the problems… I suggest that we may have to remove some of the emphasis we have lately placed on science and technology and have a new look at the arts…. artists achieve elaborations of pattern, of sustaining relationships of parts with one another and with the whole, that may be astonishingly complex.[1]

At least we can start at home.

Quiet, contemplative, creative activities open up the meandering roads in your brain to creative solution finding. Colouring is one way that ticks those boxes. You can learn lots of other easy ways in the revised Level 1 Weekend Studio Retreat: “Reclaim your Creative Potential” coming up soon.

COLOUR-FEST is 2 days of immersion into the world of colour to rest and recharge your creative brain!
Open your mind, de-stress, and tap your creative potential as you try 12 different ways to colour, find out how colours interact with each other, create vibrant, luminous effects, discover and apply your own Resonant Colour System. (last year’s prices too!) You can just do one day if you prefer.